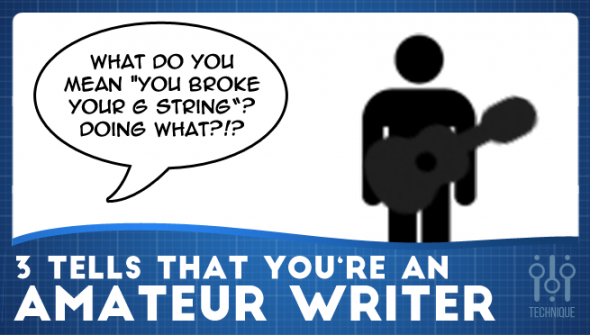 I’ve been a student of songwriting my whole life. I’ve had guitar lessons since I was 5, went to 2 different conservatories, studied jazz guitar, classical and pop music, I’ve written for bands, orchestras and big bands.

And with all of this experience I also learned a thing or two. When I listen back to my first songs I can hear that I didn’t understand a couple of simple concepts that I now use all the time.

Listening to your contributions on Feedback Friday (my youtube show where I review your songs for free) I now see that I’m not the only one with these problems. There really are 3 things I hear amateur songwriters do repeatedly that tell me they don’t know what they’re doing.

Knowing what you’re doing wrong is the first step to becoming a better songwriter, so read carefully:

Man, oh man: Avoid notes. They are tricky little bastards, aren’t they? I even hear professionals mess this one up.

An avoid note is a badly sounding note that is to be avoided (SURPRISE!). It takes a while to be able to hear them in a song, but once you have developed an ear for them, they will stick out like a sore thumb.

In music theory, an avoid note is a note that lies a b9 (= a minor second) away from another note you’re already using.

While the b9 and b13 can sound great in the proper setting, the 11 in major chords is a rite ol’ stinker. It is a big trap for Pop songwriters because it’s the only avoid note that falls on a white key (in C, where it’s the f).

Whenever I hear this note in a major chord I cringe. It screams “I haven’t developed an ear for this yet”. And really, it’s not that difficult to work around it:

There are 2 major ways in which the 11 pops up:

Go to your instrument of choice and play a couple major chords and add the 11 above it (for example a C major in the left hand and an f in the right). Play the 3rd and 11 of the chord in isolation. Listen to the dissonance, then bring in the rest of the chord again and see if you still hear it.

Train your ears and wash the 11 out of your system.

I hear it all the time: Songwriters playing instruments they haven’t properly studied. The problem: Your harmony doesn’t make any sense.

Let’s assume you’re a self-taught pianist. You didn’t learn by reading books or asking pianists for advice, you just started pressing some keys and hey, doesn’t sound so bad, does it? (spoiler: it probably does)

Most songwriters start with made up chords. This is fine if the piano doesn’t have to carry the whole song. But if it is, just pressing keys without knowing what you’re doing can sound bad rather quickly. And worst of all: you may not even hear that it sounds bad because your ears can’t tell the difference yet.

So here’s some general tips for playing an instrument you’re not familiar with:

Another biggie: Most beginning songwriters are so happy once they have something, that’s all they want to hear. So they copy-paste what they have, change the lyrics (but not much else) and voila: They have a song. Right?

Wrong. A musical piece that revolves around just one idea is just a bad loop.

Professional songwriters take you on a journey. Listening to a well-written song is like riding a roller coaster: It has ups and downs and most importantly: it takes you somewhere.

I call this “lyric-less storytelling” and it is one of the most underestimated parts of commercial songwriting (It’s so important I wrote a whole book about it).

So when you’re writing a song, make sure it draws the listener in and take them on a ride. Make listening to your songs exciting and compelling.

If this is the first time you’ve ever heard of this concept, here are 3 tips to get you going:

Of course, this is really just the tip of the iceberg. If you want to dive in deep and become a master of lyric-less storytelling, check this.

QUESTIONS (Answer in the Comments)