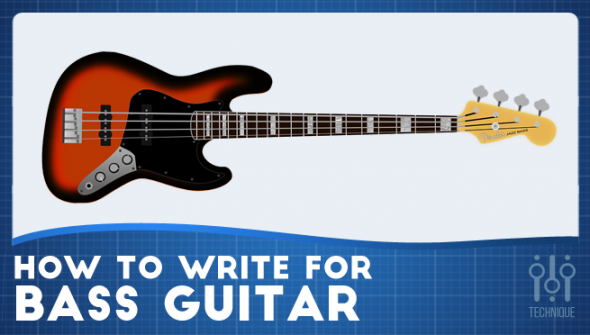 You’re a songwriter/producer and you want to know how to write sexy bass lines? Here’s 3 pro tips:

Keep your bass parts monophonic (one note at a time). Do not write chords for the bass guitar, even if it’s just octaves or fifths.

The reason why you don’t want to write polyphonic chords for your bass player is that the bass plays in a very low range. And the lower you get, the muddier the sound. In fact, each interval has an official “Low Interval Limit” at which point it stops sounding good. For the third for example, this low interval limit is around d below middle c.

The more complex the interval (= the higher in the overtone series), the higher the low interval limit. In other words, simple intervals like the octave or fifth can be played very low, whereas a seventh should be played fairly high in order for it to still sound good.

As a general rule, do not ever write any intervals lower than f below middle c. This of course with the exception of the fifth and octave – those can be written pretty much as low as you want.

Still, it is rather uncommon to let the bass play chords, even if its intervals are played above their respective low interval limits.

Besides the octave and fifth, there are few notes that lend themselves to this approach, again because of their low interval limits. That means that even if you don’t play both notes at the same time, when you play a third in the bass make sure it’s above its low interval limit.

If you want to let your bass player play chords or intervals, let them play higher up on the neck and on the higher strings. This way, they stay away from their low interval limits and the intervals sound strong and clear.

(Want to learn how to write for drums as well? Check this)

In 99% of your songs, let the bass play root notes. It’s the strongest note you can play and it gives a warm sense of clarity to each chord.

Here’s a couple of examples when you could decide NOT to use the root note:

If you don’t have any guitars in your song, or if the guitars are not playing rhythmically, the interaction between kick drum and bass guitar becomes vitally important. I will not go into this here as this concept is really rather complex but if you want to learn more about this, there is a long, long section just about this very subject in this masterclass here (and it’s easily my favorite part of the program).