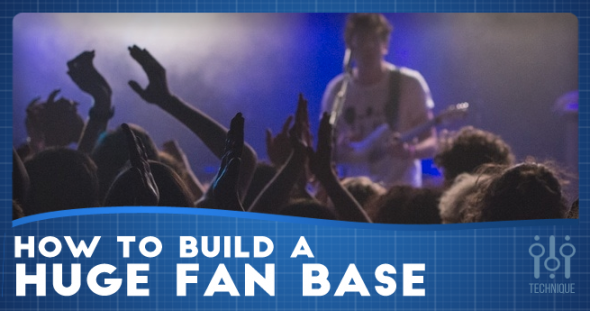 “How can I reach more people?” is a question I hear songwriters ask all the time. “How can I get my music out there?” Who wouldn’t love to build a fan base that loves you, supports you and pays for your gambling addiction. …Right?

The problem with the How-Can-I-Reach-More-People question is, as every marketer will tell you, this is the wrong question to ask.

The question you should be asking yourself is “Who am I already selling to?”

(Btw, if your answer is “only friends and family”, you can skip this tip for now and come back to it later when you’ve sold at least 100 EPs to strangers.)

Instead of looking for new markets to sell your music to, figure out who your perfect fan would be – what I call your “Superfan”.

What do they like doing outside of listening to music? What kind of artwork do they enjoy? Do they listen to music actively (singing/dancing along) or passively (is it on in the background)? How old are they? Where do they live? These are all questions you need to know about your audience.

“But Friedemann, my listeners are so different! I even have fans who are in their 50s!”

You’re right, there’s never just one type of fan. You will have very different people listening to your music. It’s not like you’re gonna have an army of one and the same person in your audience every night.

But there will be some fans who are more excited about you than others. If 15 fans come to your band stand after the concert and 12 of them are men between 15 and 21, you now know a lot more about your core audience.

What do you do with that information?

You shift your image/style/music/marketing strategy slightly to make these fans happy. They like you, now make them love you. Turn your fans into Superfans.

For example, find out what kind of artwork your core audience likes and make an album cover that looks the part.

Is your audience into fairy tales or sword-swinging warriors? Go for a Serif type font as the font you use for all your stuff. Is your core audience into computers and modern design? Go Sans-Serif. See how they react and act accordingly.

Where do you get most of your online fans from? Spend a month getting into Facebook ads and figure out which target audience brings you the most clicks.

Is your audience into action movies? Make a music video that has a lot of action in it. Do they like Romantic Comedies? Keep your videos up-close and personal. You can take this concept as far as you want it to.

Once you find something that works, narrow down. You know your Superfans liked that one slightly more ambient track you did. Well, write another and go even more ambient this time. Keep polishing and figure out what works and what doesn’t. Every bit of information counts.

Why is all of this so important? Because you want your core audience to be happy. If your fans tell you they don’t like your new haircut or color palette, change it – at least in the beginning of your career until you know what you’re doing.

A happy fanbase will buy more merchandise and most importantly, they’ll share your stuff – and guess who they’ll share it to! Their friends – people who most likely fit your description of your Superfan as well.

Research shows that we are the average of the 5 people that are closest to us. We share the same interests, have the same income, the same body weight, even the same aspirations and dreams.

Understanding this is crucial if you want to build a fan base because it means once one of your Superfans shares one of your posts or talks about your band, people will hear your music that are very likely to like it as well.

So ask your fans what they want. Do they want the next EP to be heavier or would they like to hear more ballads? What’s their favorite song on the EP? Figure out what works and do more of that.

As an added bonus, the Superfans who gave the suggestion feel extra special for helping you change into something better, which is another incentive to spread the word about you.

If you google the video game “Watch Dogs” or the movie “The Purge” you will soon find out that many people were disappointed with the first parts of these series. They liked the idea (both projects did very well commercially) but did not like the execution.

So what did “Watch Dogs” and “The Purge” do? They listened to their fans and made/are making a second part that meets their expectations. The Purge 2 was an even greater success than the first and this time, the reviews were on par. I have no doubt Watch Dogs 2 will be a similar case.

Possibly the greatest thing about the internet is that you’re right on the pulse of your fans. Being able to get instant feedback on what you’re doing is a huge advantage you have when building a fan base that you wouldn’t have had 20 years ago. Use it.

Obviously, no one is asking you to do things you don’t want to do. If you hate the song everybody loves, don’t force yourself to write more songs like it. Most importantly, stay true to yourself. Don’t let anyone change you.

BUT, in the realms of staying yourself there’s usually still a lot of room for experimentation. I don’t really care whether my next album sounds more like song A or song B from my EP, I can turn both into something that I like and if it also makes my fans happy: All the better.

Don’t become a puppet and let your fans decide everything. You are still the artist. In the words of Henry Ford: “If I’d asked the people what they wanted, they’d said ‘build a faster horse’”. But don’t shut yourself off from the outside world, either.

If people keep telling you that the bridge in “that one song” is their favorite moment of the whole EP, listen to it and think about what it is that works here. Then write a new song that has that same feel to it. Of course you’ll add in new flavors. Make it your own. But find out what people like and do more of that.

Listen to Maroon V, Beyoncé, Jennifer Lopez, all the big artists. Listen to their first albums. You will hear what later became their signature sound in an undeveloped state. Now listen to their newest albums and see how it’s evolved.

How To Find Your $1 Million Song Title (incl. Video)